What could a Trump presidency mean for technology? 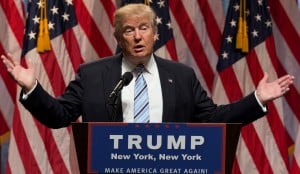 In one of the biggest underdog stories of the last decade, Donald Trump will be the 45th President of the United States. The US election that felt as if it has dominated the headlines forever, is finally over and a new presidency will likely bring a change of direction for the most powerful country on Earth. This could have some profound implications on the technology industry across the world. In this article, I will be examining some of the claims and policies that Mr. Trump made regarding technology during his campaign and how those policies might affect the industry going forward.

Closing up the Internet

“ISIS is recruiting through the internet... we should be using our brilliant minds to figure out a way ISIS cannot use the internet. I would certainly be open to closing areas [of the internet] where we are at war with somebody.”

These are the words of Mr. Trump at a Republican primary debate in 2015. On the face of it, it seems as though this policy is quite good. Young minds across the west are poisoned by the radical extremist message of groups such as ISIS. However, locking down parts of the internet could prove to be problematic for businesses and consumers. This sort of filtering would bring the US in line with China, which blocks sites such as Facebook and Twitter. It is safe to say that such a policy would be extremely difficult to get through congress.

Most of us will be familiar with the case of the FBI vs Apple. The FBI called on Apple to weaken the encryption on an iPhone recovered from a suspect in the San Bernardino case in order for them to extract useful information from it. Apple refused, citing that helping the FBI would weaken their security across the board and leave their customers open to hacks. The case was a particularly controversial one, and Donald Trump gave his opinion on the case:

“Boycott Apple until such a time as they give that information… I would come down so hard on [Tim Cook] his head would be spinning all the way back to Silicon Valley.”

The argument of encryption divides people. Some believe that their private data should not be allowed to be shared with their (or foreign) governments regardless of the security implications, whereas others feel that data should be shared with government to ensure that that terrorists and criminals don’t have a safe haven to communicate and coordinate.

By forcing companies with servers in the US to share that data with the FBI and the NSA, it could compromise data security. Personal data could be shared with government without your permission, which goes against the ethos of most technology companies. Removing encryption could also leave your communications and data open to be intercepted by hackers. Although some feel that is necessary to protect us from terrorism.

Some argue that ISPs shouldn’t pick winners and losers in the online marketplace for services and ideas as it encourages competition.

However, others argue that allowing ISPs to charge more for preferential treatment will result in faster internet and more innovation and that market demand should control priority of content on the internet.

Donald Trump has hinted that he may be against net neutrality in the past, tweeting: “Obama’s attack on the internet is another top down power grab. Net neutrality is the Fairness Doctrine. Will target conservative media.” In 2014.

Whether abolishing net neutrality is a good or bad thing will depend largely on your point of view. It will, however, likely cause big internet companies to get bigger using their financial clout at the expense of smaller companies.

Technology has progressed to provide more green solutions. For example, Tesla have used technology to create electric cars that are actually desirable, and advances in Technology have led to more efficient ways of doing things, that result in fewer carbon emissions.

Donald Trump believes climate change is a hoax and is quite vocal about that opinion. “The concept of global warming was created by and for the Chinese in an effort to make US manufacturing non-competitive.”

Trump has pledged to increase America’s fossil fuel output by ditching subsidies offered to renewable energy efforts. The hard work and effort that we have made to improve clean fuels and green technology will be halted. Climate change is real and is backed up by countless evidence. Ignoring the facts is counterproductive and damaging.

There is an element of uncertainty for the technology industry at the moment. Silicon Valley worries that if it is strangled by regulation and litigation then it will dwindle in power. The next four years will be crucial.