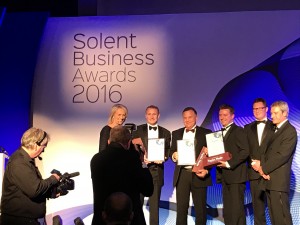 Runner up at Solent Business Awards 2016!

Despite gloomy news reports about the UK economy following the Brexit vote, it is clear that business is alive and well in the Solent region of the south coast of England. On the evening of the 20th October 2016, the Hilton Ageas Bowl was filled with what Sally Taylor MBE, presenter of BBC South Today, called 'the brightest and best businesses in the South'. The Solent Business Awards is a multi-category awards event that is the largest in the South Coast region.